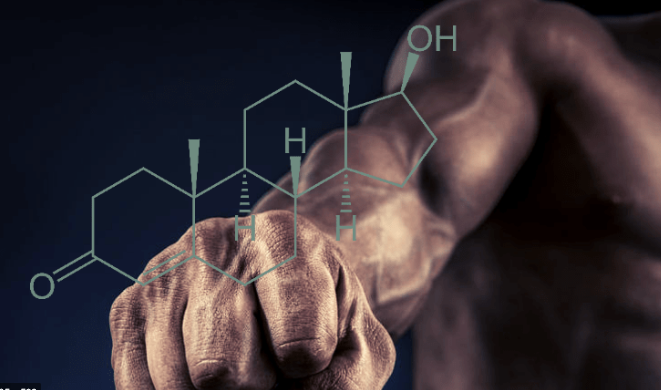 Testosterone has a fascinating double life: A molecule with a precise chemical structure, it also has an outsize cultural presence, winning praise and blame for a wide range of characteristics typically associated with masculinity. Many of the claims go well beyond or even directly against the scientific evidence about what scientists call “T.”

Myth No. 1 – Testosterone is the male sex hormone.

In answer to the question “What are male sex hormones?” the National Institutes of Health says testosterone is one of the most abundant of the androgens, “a class of hormones that control the development and maintenance of male characteristics.” The website Live Science says testosterone “is a male sex hormone that is important for sexual and reproductive development.”

But T isn’t just a male hormone: It’s also the most abundant biologically active steroid hormone in women’s bodies — crucial for female development and well-being. It helps support ovulation, for instance. And T isn’t just a sex hormone, either. In men and women, receptors for the hormone are found in almost all tissues, and it contributes to lean body mass, bone health, cognitive function and mood, among other attributes.

Both testosterone and the supposed female sex hormone estrogen were identified in the context of scientists’ search for the chemical essences of maleness and femaleness, an origin story that helps explain the tenacity of the “sex hormone” label. Another explanation may be the confusion of quantity with importance. Yes, men generally have much higher levels of T than women. But greater quantity doesn’t equate to greater function (elephants have bigger brains than humans, but brains aren’t more important to elephants than to us).

ne of the most enduring storylines in discussions of testosterone is that “higher levels of the hormone cause aggression,” as the Guardian put it in 2017. A 2012 study in the International Journal of Endocrinology and Metabolism asserted that there’s “evidence that testosterone levels are higher in individuals with aggressive behavior.”

Yet “gold standard” studies — placebo-controlled trials in which neither the research subjects nor the investigators know which people are getting T — have shown that even extremely high doses of the hormone don’t increase hostility, anger or aggression in men. And when it comes to endogenous T, the kind produced by people’s own bodies, the classic studies linking T to aggression and violence are badly flawed because of imprecise measures and poor statistical practice — as we found when we reexamined them. A common defect, on display in a much-cited 1987 study of 89 prison inmates, is to include so many measures of aggression — past criminal acts, survey answers, disciplinary infractions, subjective evaluations of “toughness” — that finding a link between T levels and some attributes is pretty much guaranteed, by chance alone.

No. 3 – Testosterone supercharges your love life.

Ads for testosterone boosters promise “vigor & vitality,” increased “stamina” and “improved confidence in the bedroom,” while tabloid publications make tantalizingly specific pronouncements such as: “The higher the testosterone level, the greater the amount of sexual activity.”

Unfortunately for marketers and would-be Lotharios, “studies of men’s testosterone and sexual behavior suggest either weak or null relationships,” as one review of the scholarly literature put it in 2017. A certain (relatively low) level of testosterone is necessary for optimal sexual functioning, but above that threshold, more T doesn’t make much difference, for men or women. And the causal chain between testosterone and a healthy sex life can go in the opposite direction from what’s usually assumed: Sexual activity and even lust have been shown to increase testosterone (as have many other things, such as exercise or receiving positive feedback from a boss).

After the 2008 financial crisis, some commentators pinpointed one possible cause: Traders, overwhelmingly young men, take irrational risks because of high T. A European Union commissioner was “ ‘absolutely convinced’ that testosterone was one of the reasons the financial system had been brought to its knees,” according to a 2009 New York Times article. International Monetary Fund head Christine Lagarde has suggested that “if it had been Lehman Sisters rather than Lehman Brothers, the world might well look a lot different today.”

But the studies attempting to link T to financial recklessness are weak. An often-cited 2008 study by two Cambridge University neuroscientists set out to show that financial gains might raise T levels, causing riskier bets, which in turn would raise T — a dangerous spiral. They measured the T of 17 traders in the mornings, and again in the afternoons, for eight days and tracked their financial performance. The scientists managed to show that people who had relatively high T in the morning tended to have higher earnings that day. But they either didn’t look for, or didn’t find, an association between a day’s high earnings and testosterone levels in the afternoon — which is what their risk-spiral hypothesis would require. Again, the paper’s modest findings were probably due to chance, given how many analyses were conducted.

No. 5 – The more testosterone, the better the athlete.

“The science is quite clear,” T researcher Aaron Baggish of Massachusetts General Hospital told the New York Times. “An androgenized body has a performance advantage.” Researchers affiliated with the International Association of Athletics Federations asserted that “wide sex difference in circulating testosterone concentrations … largely account[s] for the sex differences” in athletic performance.

But T’s effect on athleticism isn’t straightforward, in either men or women. At the most basic level, no study has ever concluded that you can predict the outcome of speed or strength events by knowing competitors’ T levels. And while T does affect parameters related to athleticism, including muscle size and oxygen uptake, the relationships don’t translate into better sports performance in a clear-cut way. Consider a study of 52 teenage Olympic weightlifters — an elite group, male and female. Among the boys, there was no relationship between T levels and strength, and among girls, the athletes with lower T lifted more weight. In one widely disputed study, researchers claimed to have found that high T levels predict high performance across various track-and-field events. But in one of several analyses produced by the authors, in three of 11 running events athletes with the lowest T levels did better than those with the highest levels. Indeed, in the 100-meter race — which requires explosive strength, a trait often associated with T — the lowest-T runners ran about 5 percent faster than their highest-T counterparts. Such variable findings, common in the literature, cast doubt on the thesis that T is a master key to performance differences in sports.